Planning Permission and the start of 2018

In the early part of 2018 we heard about the fact that planning permission had been granted (on the 10th January to be precise):

The full consulting and decision period had been used and the cost (apart from Architect fees was £ ZERO (as we have no permitted development rights due to the conservation area). We did however have to pay £252 for building regulation approval.

I got to thinking about the electrical sockets and switches we would need, adding in aerial, HDMI and Network sockets also.

To me it made sense to add in everything we ‘may’ need whilst ceiling were down, and walls were being battened out (in other words when it was easy to hide cables!)

Below is my initial plan (created in Photoshop after an initial multi-coloured scribble on a piece of A4) and additionally the one that Robin, the Architect, drew up that we provided to the builders to obtain quotes.

This changed slightly as the conversion took hold, we added CCTV and decided on the exact alignment of the kitchen and dining room downlighters (which meant adding two extra lamps in the process).

Also later on we gave plans for the switching i.e. which switches controlled which lights and where they would be single, two or three way switched, also if there were dimmers in the loop too.

In due course we incorporated ‘Hue’ lights to be controlled via iPhone and Android apps as well as ‘Alexa’. 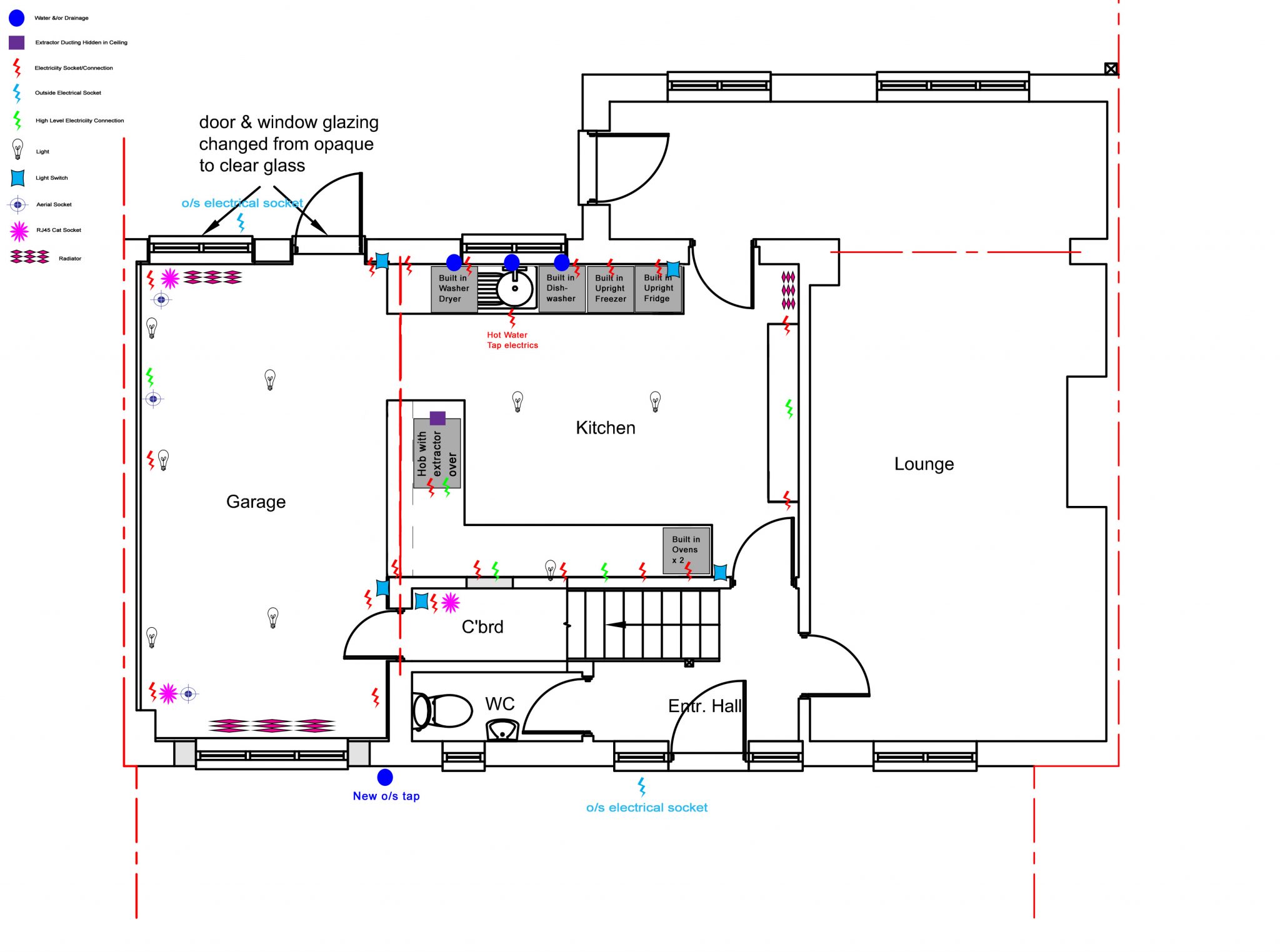 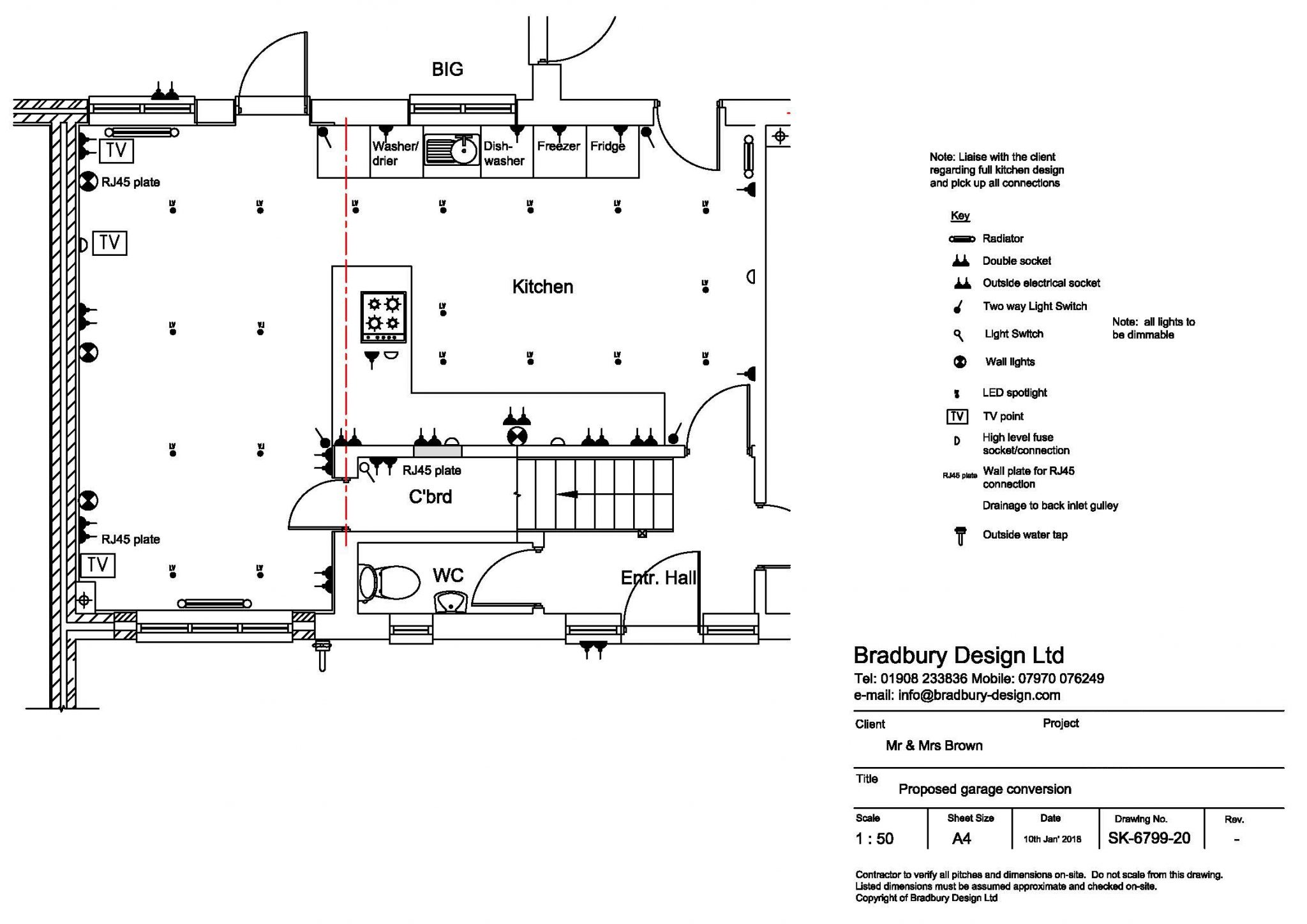 It was too expensive to have all the lamps as ‘Hue’ as that would have cost far too much, at final count we have:

• 20 GU10 LED downlighters (2 of which are Hue)
• 3 uplighters – each with s Hue Colour lamp
• 6 undercabinet LEDS
• 2 Hue Colour Light Strips
• A motion sensitive switched Hue lamp in the understair cupboard (you open the door the light comes on, switching off after a predetermined number of minutes)
• 4 further GU10 lamps in the Hob Extractor unit
• 2 no 15 metre HDMI cables (with brush outlet boxes)
• 3 aerial connections (powered by a booster)
• There are 3 network connection points plus a PoE Network hub plus a wireless AC wifi powerline device
• As far as electrical sockets there are 10 plus 3 extra in the understairs cupboard and additional ones behind the units for each of the appliances and a new Hot Water tap
• Switches are sited in 6 places and incorporate 14 separate switches/dimmers
• Also, the consumer box was replaced and upgraded
• A bank of switches in the living room were re-sited due to a door being reverse swung
• External lights with dusk sensors were fitted to both front and rear of the house
• As were external double power sockets
• Additionally, a new underfloor heating thermostat for the dining room and a Nest thermostat that controls heating for the rest of the house and hot water (via our oil fired boiler) in the living room (also Alex controllable!)
• CCTV back and front

I think we covered it all…..

Cracking on with the plan we had already spoken to two builders (before getting planning permission or having any plans drawn up), with one quoting a simple 4 figure sum to carry out the conversion, the other 5 figures that got 20% larger when I indicated I may want a proper invoice and receipt!

Stadium Studios would install the kitchen so the builder needed to complete all conversion works and fit out with all the electrical aspects, including all lighting, electrical sockets, switches, as well as heating to the new room and drainage, the network and aerial sockets etc too. In effect all services to the points needed in the new dining area as well as the kitchen so that Stadium Studios could fit the new kitchen in place with power and drainage in the correct places already.

It is at this point that we contacted several more builders, as well as going back to the two original ones, and provided the plans that had been approved by local planning.

In all we saw 7 builders, with prices varying by a significant amount – the two who initially quoted both increased their quotes, one by three-fold and the other by £9000 plus vat!

Most came in over a 2-3 week period, with some checking by text if we had made a decision at various points (in fact one texted Sharon only 2 days ago on the 27/5/2018 – almost a month after the majority of the work had been completed by the chosen builder. He wondered why we hadn’t chosen him when all we had received was a quote by text!).

Another came back 5 weeks after being asked to quote to ask a question about a door and whether we were keeping it or not, it took another 2 weeks to receive the quote by basic email, by which time we had chosen someone else.

The builder we chose was Nick & Wayne of Crown Construction, their details passed on by a mortgage client of mine.

Nick produced a quote that was 5 pages long and relatively straight forward to follow.

Additionally it detailed the optional areas we had discussed, plus some work that may be required but couldn’t be determined until the job had started i.e. we couldn’t be sure what room there was between the floor/ceiling joists and as a result, until the ceiling was taken down we wouldn’t know if the new steel beam would fit in the existing void (and not project past the ceiling level) or whether they would need to create a box around it, or at our choice, batten and drop the whole of the ceiling level to mean a clean single height level throughout.

His quote included the following detail (this is not the entirety):

Extra works that we are aware off but may not be needed, these items are not included in this estimate

Option to move existing Kitchen/Living room door way, Not included in this estimate

(Existing door may now be swung on opposite side with parliament hinges, moving light switches to other side of opening)

As the build progressed we had plenty of ‘Whilst you are here’s’ to add to the ‘Nick List’ too!

Having decided to use Crown Construction, we agreed on a start date of the 26th March 2018, it was the 16th February so we now had to sort out the shed, loft, remove the contents of the garage and finalise the kitchen over the next 5 weeks or so!

We had a date for the start of the kitchen installation from Stadium Studios of the 30th April 2018 which allowed 5 weeks for the garage conversion and building work to be completed (with an estimate that it would take 4-5 weeks for the building work).

What also worried us was the fact that Nick @ Crown asked if we would be moving out whilst the conversion took place…..we definitely wouldnt, but now a couple of months on, understand why we might want to!